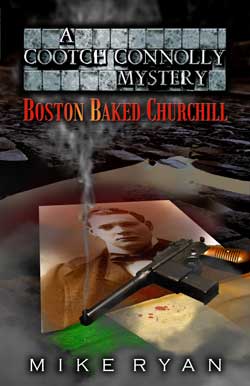 A failure at baseball and a hopeful historian, Cuchulain “Cootch” Connolly becomes a probation officer at the Boston Municipal Court and investigates the death of a client. Henry McGinnity is found dead in bed by his wife and Cootch. There are no apparent signs of his demise, but Cootch knows that McGinnity was a member of a secret society with ties to the Fenians. Formed just before the Civil War, the Fenians sought freedom for Ireland. These rebels recruited Irish-American Union soldiers in the hopes to bolster their forces in Ireland. With the help of his brother Finn, a Boston cop, Cootch suspects that the Fenians, only a few diehards by 1900, killed several Civil War veterans who broke away from the cause, including his father.

Cootch also writes fan letters to two writers named Winston Churchill, one English, the other American. The Englishman, just elected to Parliament, has earned his fame through his exploits as a soldier, war correspondent, and author; the American has published a blockbuster historical novel. Before taking his seat in the House of Commons, Winston S. Churchill embarks on a lecture tour about his Boer War experiences. Young Churchill writes to Cootch that he is being threatened by the Fenians if he pursues his speaking itinerary in America. On December 17, 1900, the two Churchills finally meet in Boston on a day destined for bombs, bullets, and bodies.