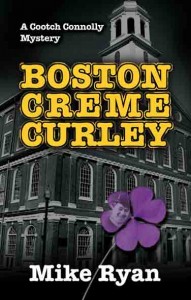 In 1903, trouble finds Cootch Connolly, a probation officer at the Boston Municipal Court. Cootch only wants to write history and to root for his favorite baseball team, but the death of a new judge and a probationer ruins his plans.

His brother, police inspector Finn Connolly, wants Cootch to help a rising young politician named James Michael Curley who has been charged with the crime of impersonating a constituent at a federal postal exam. Curley suspects someone wants to kill him

Cootch is threatened by a member of the Federalist League, an anti-Irish group, for asking about a hot piece of property near Boston City Hospital which has attracted several bidders. While trying to find out who owns the parcel, Cootch also juggles his feelings for an old South Boston friend who happens to be a nun

When Jim Curley attends the last game of the first World Series, Cootch and his brother foil an assassin who tries to kill Curley. After Cootch subdues the gunman on the grandstand roof, he and Curley later set a trap for a killer at Faneuil Hall.